NOW ON THIS DAY THE COUNTY COMMISSION met pursuant to law in the Courthouse in the City of Lamar, MO. 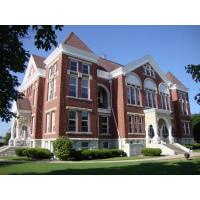